”I always search for a theme which sets me and my thoughts in motion and try, by means of the choreography and new formats, to test its borders.“ 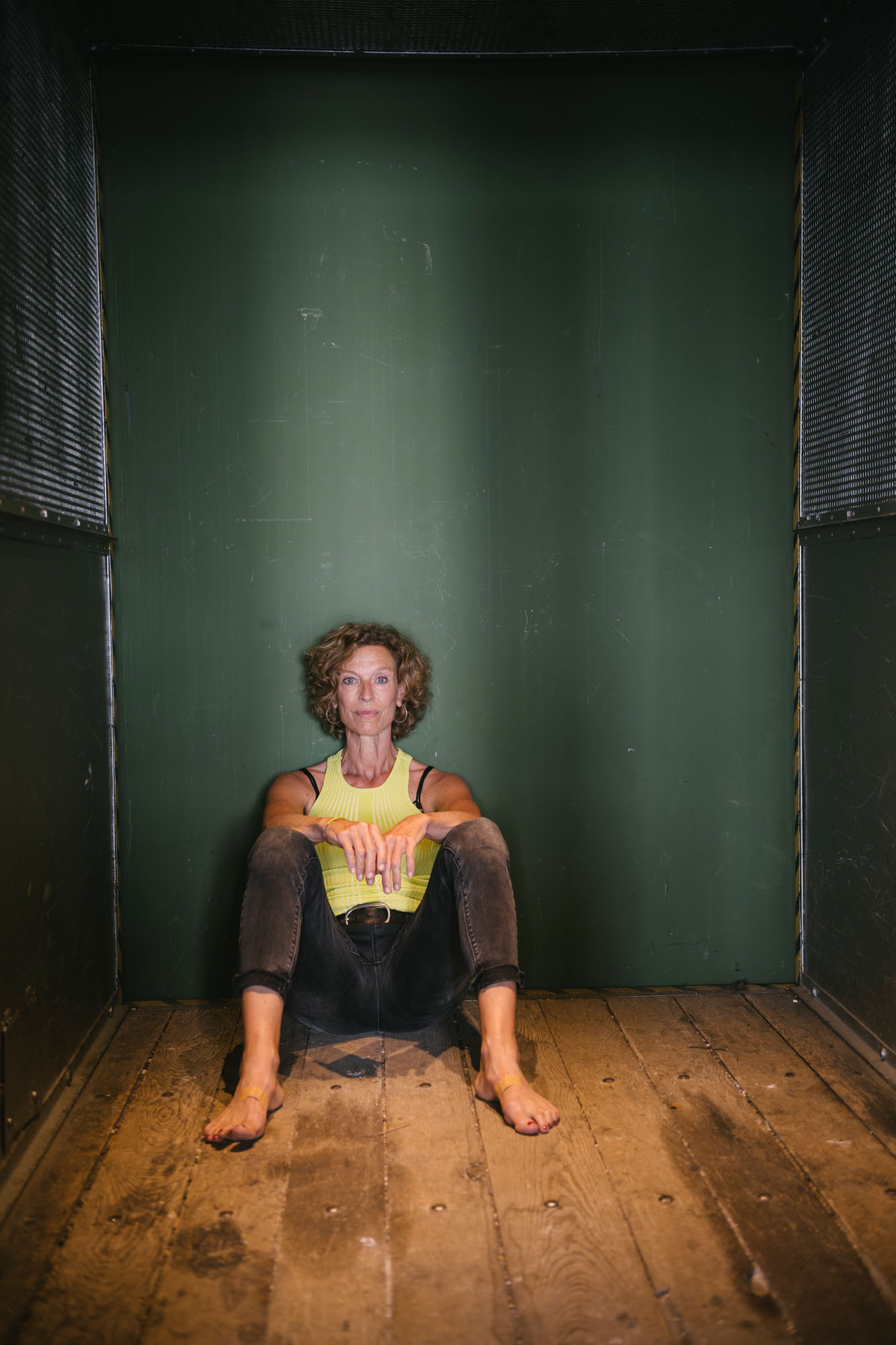 ”(…) A. Rauh and G. Seidel have created a piece laden with energy, but which is also intelligent, sensuous and thought-provoking (…).“

”(…) An exciting, courageous experiment, which consciously undermines our ususal expectations and viewing habits (…).“

Alexandra Rauh* is a freelance choreographer, dancer and dance facilitator. She has been developing her own choreographic work since 1998, work which attempts to go beyond the normal expectations of theatre experience. The human body acts as an archive for movement and behavioural  patterns, which are transported into new formats using performative and interdisciplinary tools.

Alexandra Rauh‘s artistic works allow realities and their inherent systems to grate against one another. Disruptions and irritations are used as an aesthetic element to elicit visions of new systems of order. Current socially relevant themes provide Rauh with the impulse for her work, in which she reflexively deals with dance and performance. She tests the borders of the genre in order to facilitate a new perspective on a certain theme, employing phenomenen in an unexpexted way. She places demands on the audience’s perception and their accepted view of things.

*After her training in dance theatre and dance paedagogy in Nuremberg and Zurich Alexandra Rauh worked as a dancer in productions in Germany and abroad (eg. Theaterhaus Gessnerallee/Zurich, Mousonturm Frankfurt, Kaserne Basel, Springdance Festival Utrecht). She worked in projects with, among others, Rui Horta, Nigel Charnock, Felix Rückert, Keith Hennessy and Rosemary Butcher. As a result of her intensive discourse with varying formats her productions over the last years include an installative performance, a multi-generational dance perfomance for children from 8 upwards, an app-enhanced installative performance and a performative double-bill. In December 2016 she received the award „Metropolitan Region Artist of the Month“. 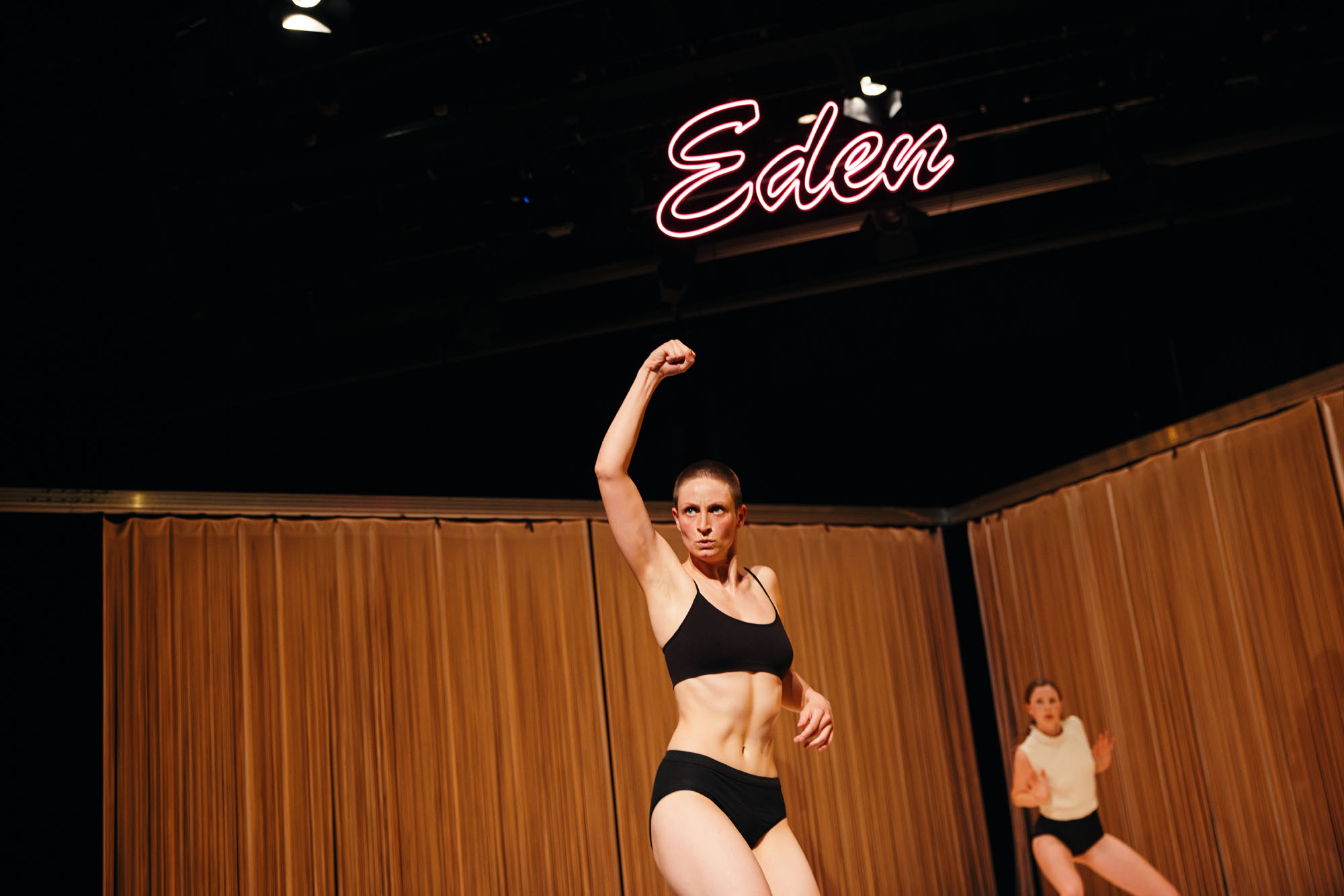 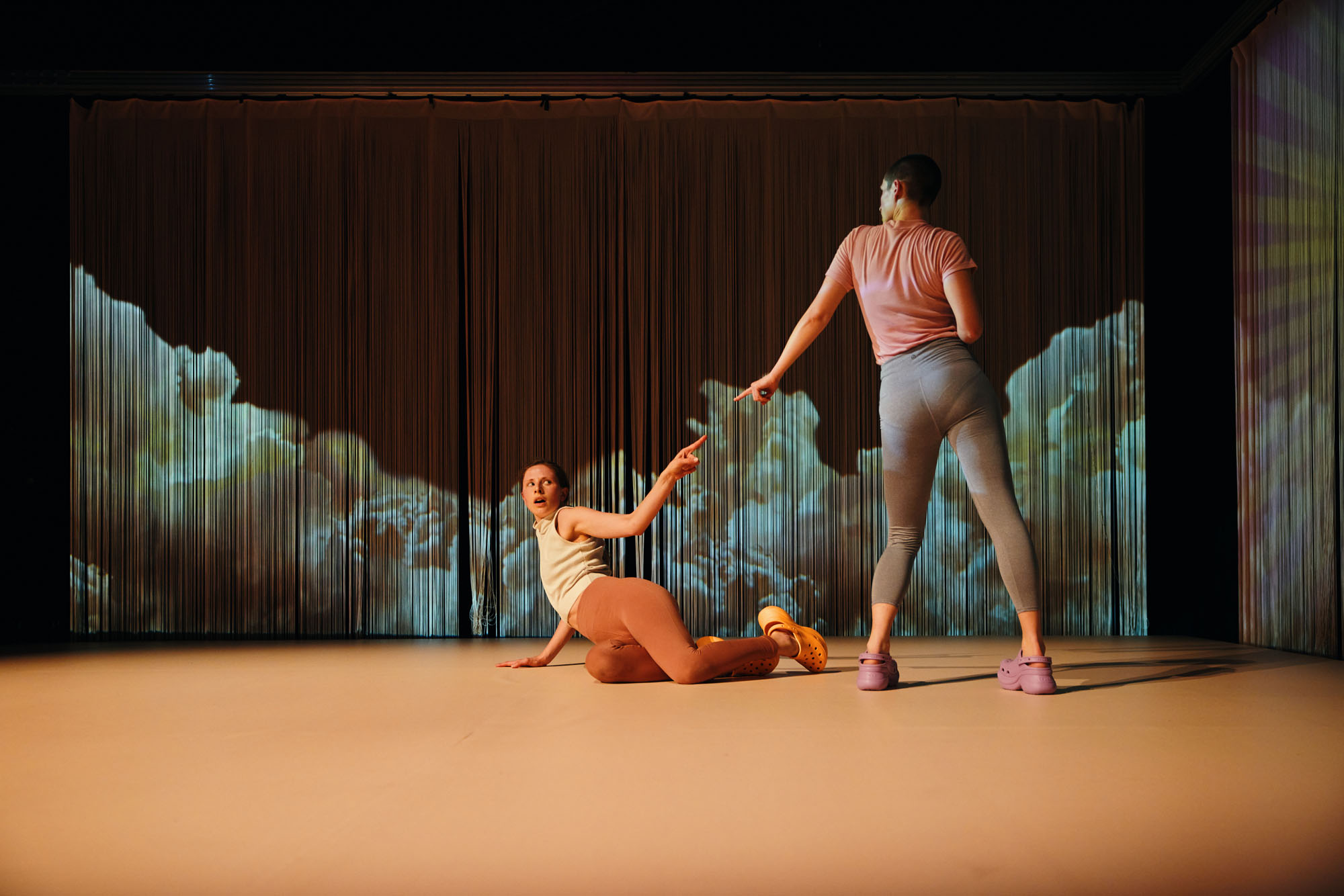 While Anatomy of Yearning presents the emotion of yearning as a kind of creature of yearning, which can be observed in a formal, consequential, abstract and purely visual choreography, in Anatomy of Embarrassment a phsyical performative, often humorous experimental concept questions what are the causes of embarrassment and where the border of indecency lies.

Both emotions are dissected, deconstructed and become, through the use of body, language, video and sound, a multi-layered associative space for the audience member. A performative double-bill moving between desire, intimacy, humour and shame, which lays open the mechanisms of yearning and embarrassment and presents them candidly.

In choreographic pictures, at the interface of dance and performance, different forms of yearning and embarrassment are examined and made visible, audible and accessible.

A co-production with the Tafelhalle Nuremberg in Kunstkulturquartier and MNEME  Kollektiv Münster, supported by Tanzzentrale of the Nuremberg Region; financially supported by the Cultural Foundation Sparkasse Nuremberg, MA7 Cultural Funding Vienna, the Bavarian Association for Contemporary Dance (BLZT) with funds from the Bavarian Ministery for Science and Culture. 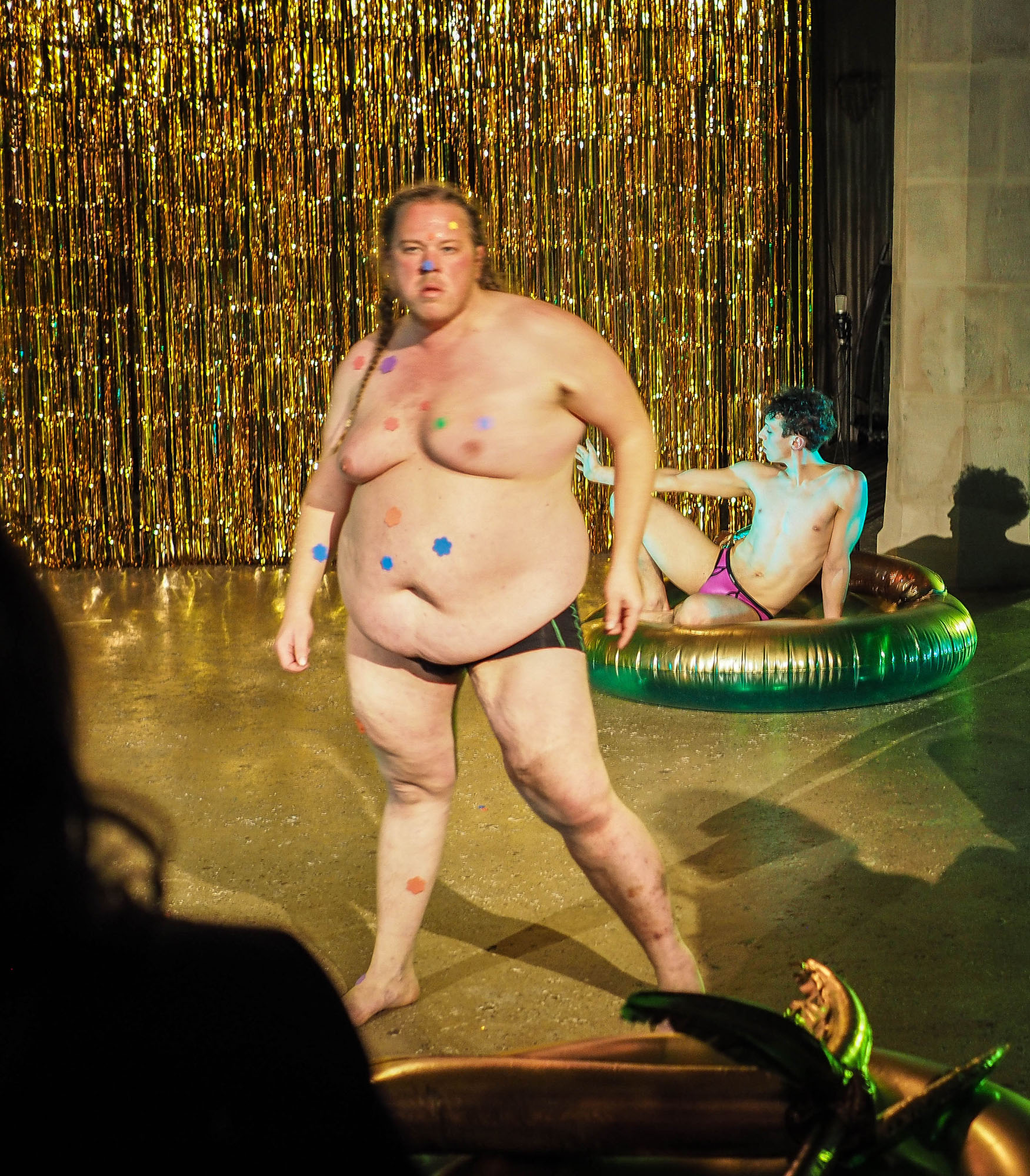 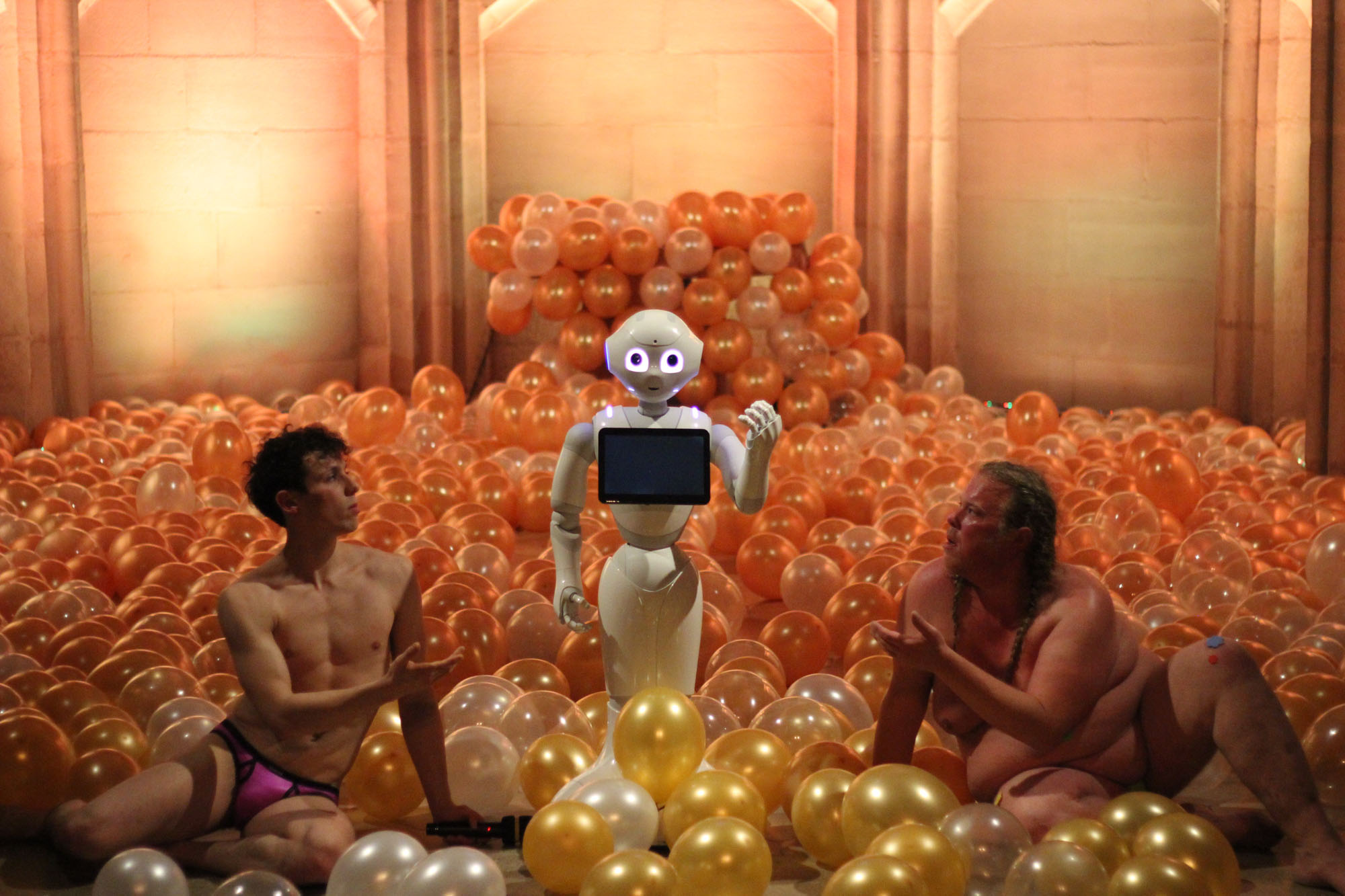 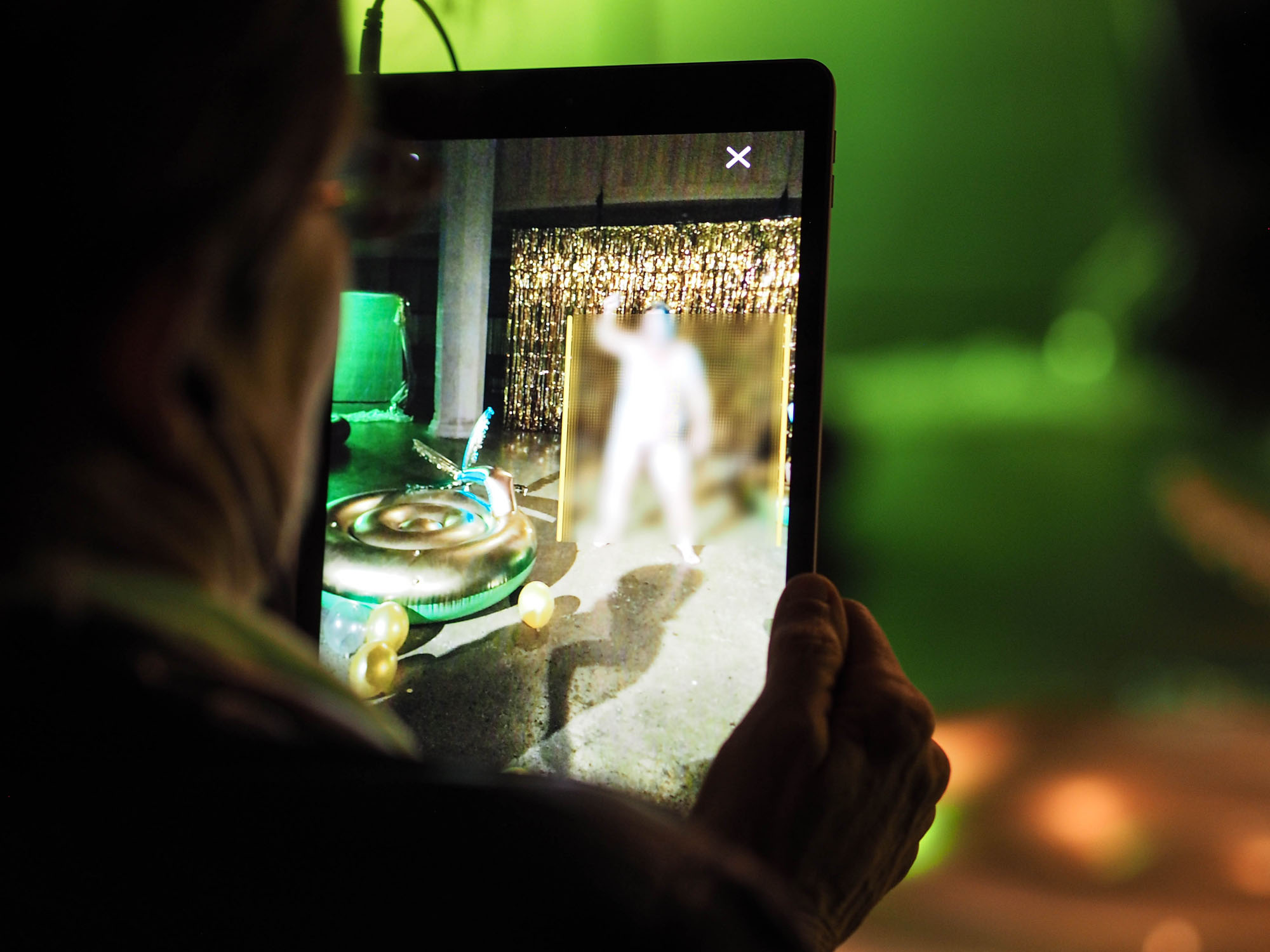 The world-wide digital expansion was the starting-point for the creation of the app-enhanced live-performance Phantom Zone in 2019 in the St. Martha Church, Nuremberg. Equipped with an augmented-reality app on his or her device, the audience could virtually change reality, become creators of his or her own reality and so conceive his or her own PHANTOM ZONE.

How will our perception of reality be changed by new technologies? How does our aesthetic experience alter when it is continually being digitally extended? Will we be able to deal with disturbances within our line of vision in the future or can we just ignore them? Aren’t they the motor for social developments? And what beauty lies in errors. misconceptions and deficits?

The human body, as a natural source of imperfection, becomes the object of constant perfectionism. Or is it, in this religious setting, naturally perfect? The performance becomes a space for the visitor to make associations and thematicises the social handling of human weakness, error and failure.

Whereas Phantom Zone was an app-enhanced live-performance, the sequel, Phantom Zone Update, will be an app-enhanced installation with an accompanying live performance. Video art, spacial installation and sound, which were present in reality in the performance space in Phantom Zone, will now be contained within the app, which can be downloaded onto a personal device  This can be used to enable an interactive museum-like visit, within a four hour timeslot in the St.Giles (Egidien) Church, Nuremberg. The live performances will also be scheduled within pre-announced timeslots.

A co-production with the Künstlerhaus Nuremberg in Kunstkulturquartier and LEONARDO – centre for creativity and innovation, supported by Tanzzentrale of the Nuremberg Region and Martha Church Nuremberg; financially supported by the City of  Nuremberg, the Bavarian Association for Contemporary Dance (BLZT) with funds from the Bavarian Ministery for Science and Culture.

A co-production with the Tafelhalle Nuremberg in Kunstkulturquartier and LEONARDO – centre for creativity and innovation, supported by Tanzzentrale of the Nuremberg Region. This project is financially supported by the Fonds Darstellende Künste with funds from the Federal Government Commissioner for Culture and the Media, as part of the initiative NEW START FOR CULTURE, the City of Nuremberg, the Cultural Foundation Sparkasse Nuremberg and the Bavarian Association for Contemporary Dance (BLZT) with funds from the Bavarian Ministery for Science and Culture. 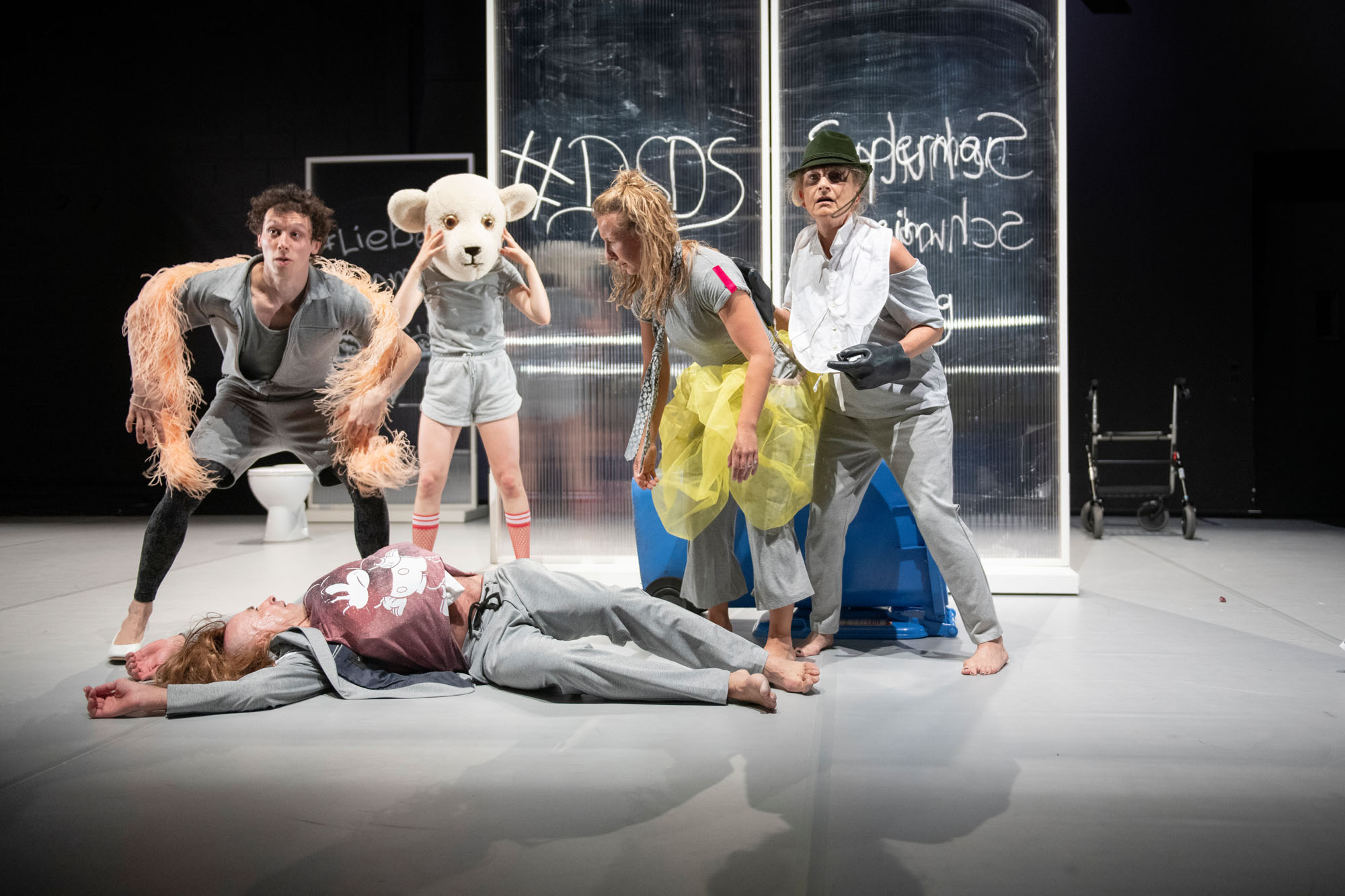 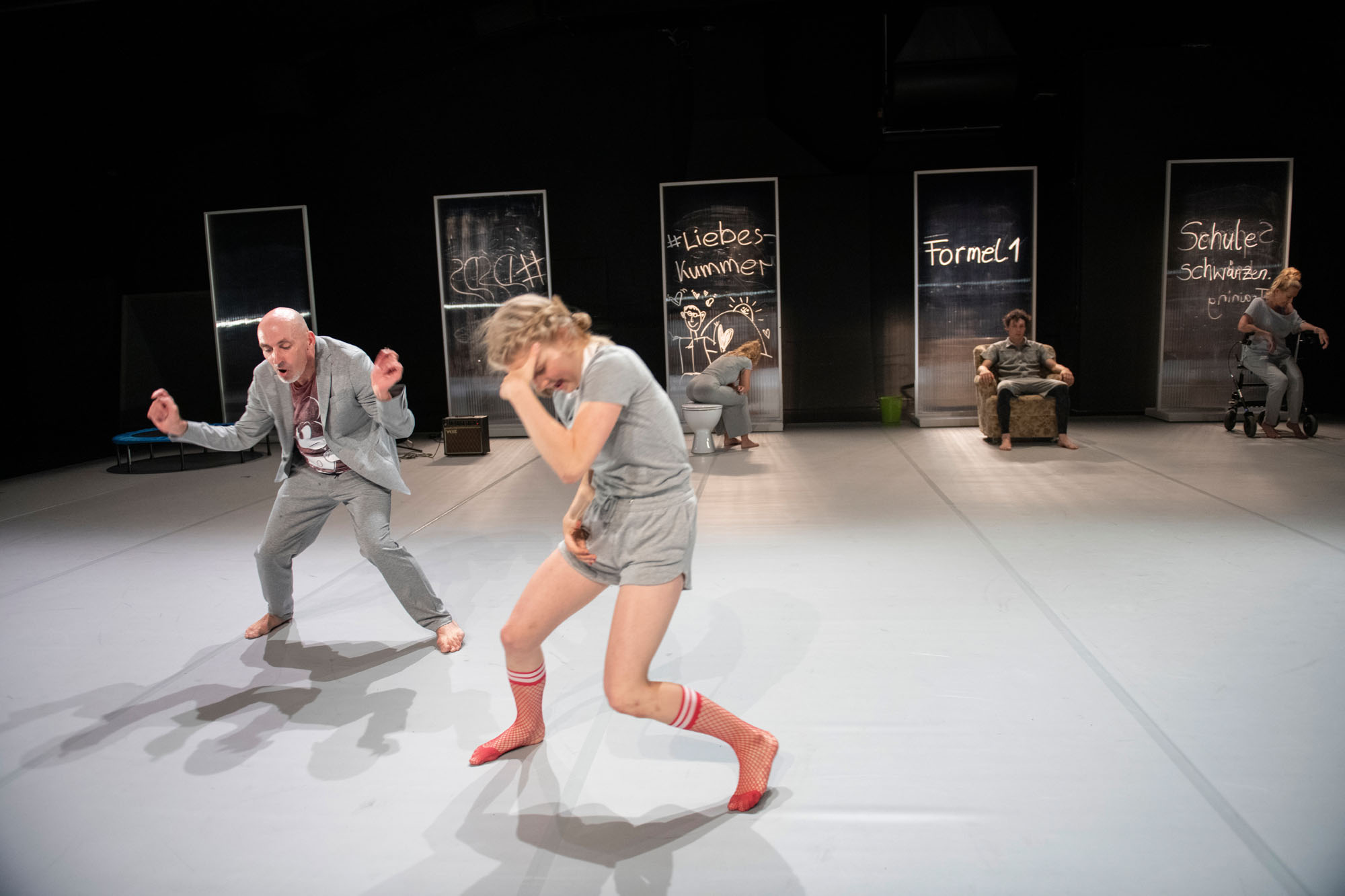 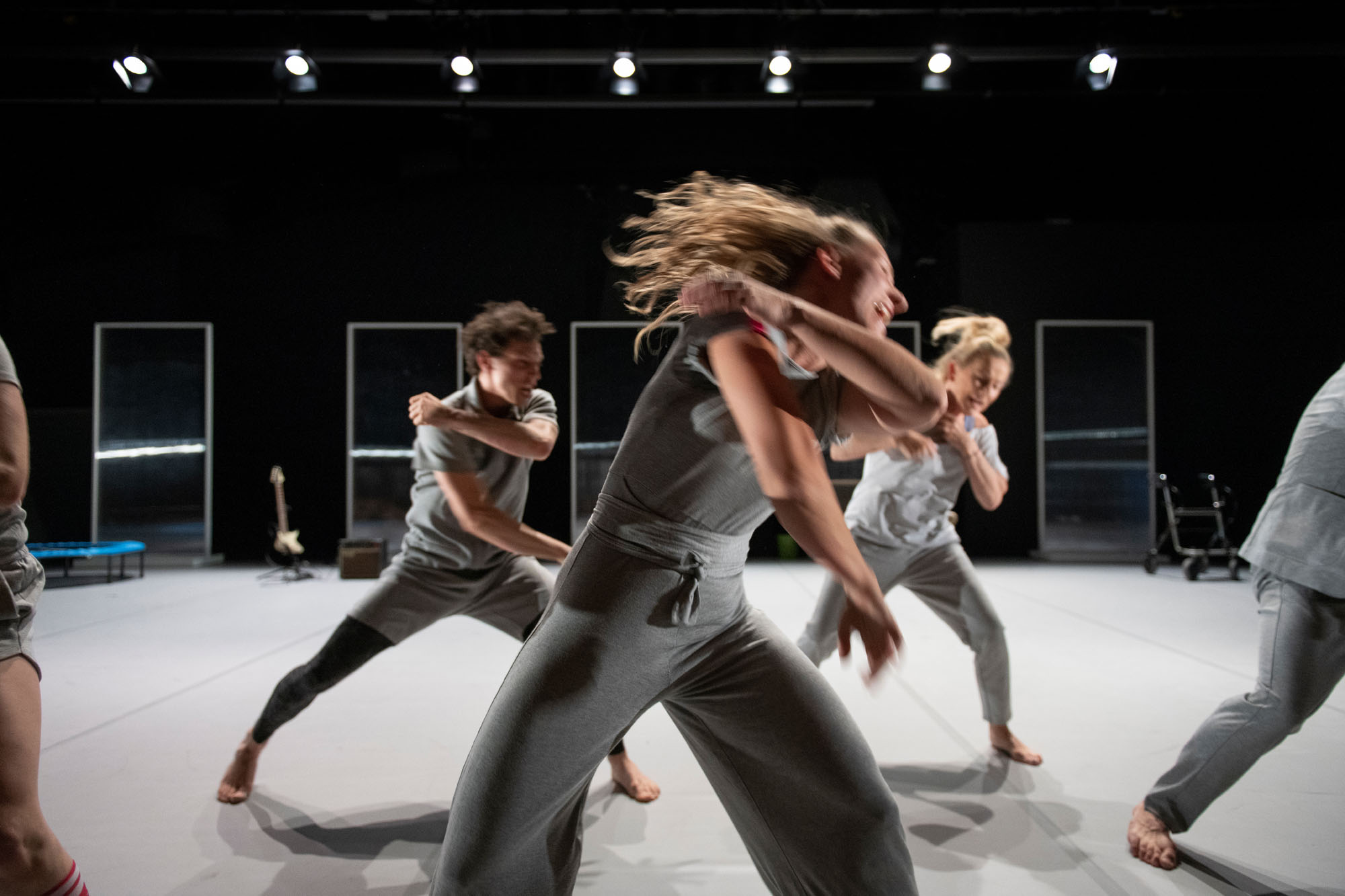 Traditions, rituals, role models and ideologies can provide a sense of security and reliability, but can also bring limitations, borders and prejudices, especially when the ususal traditions are not followed and don’t meet ones expectations or perceptions. With a good deal of humour and fun the five dancers dissect common cliches, mix them up and put them back together in a new way. They ask the question  how the generations can learn from one another.

A co-production with the Tafelhalle Nuremberg in Kunstkulturquartier, supported by Tanzzentrale of the Nuremberg Region; financially supported by the City of  Nuremberg, the Federal Programm „Democratic Life“,  the Bavarian Association for Contemporary Dance (BLZT) with funds from the Bavarian Ministery for Science and Culture. 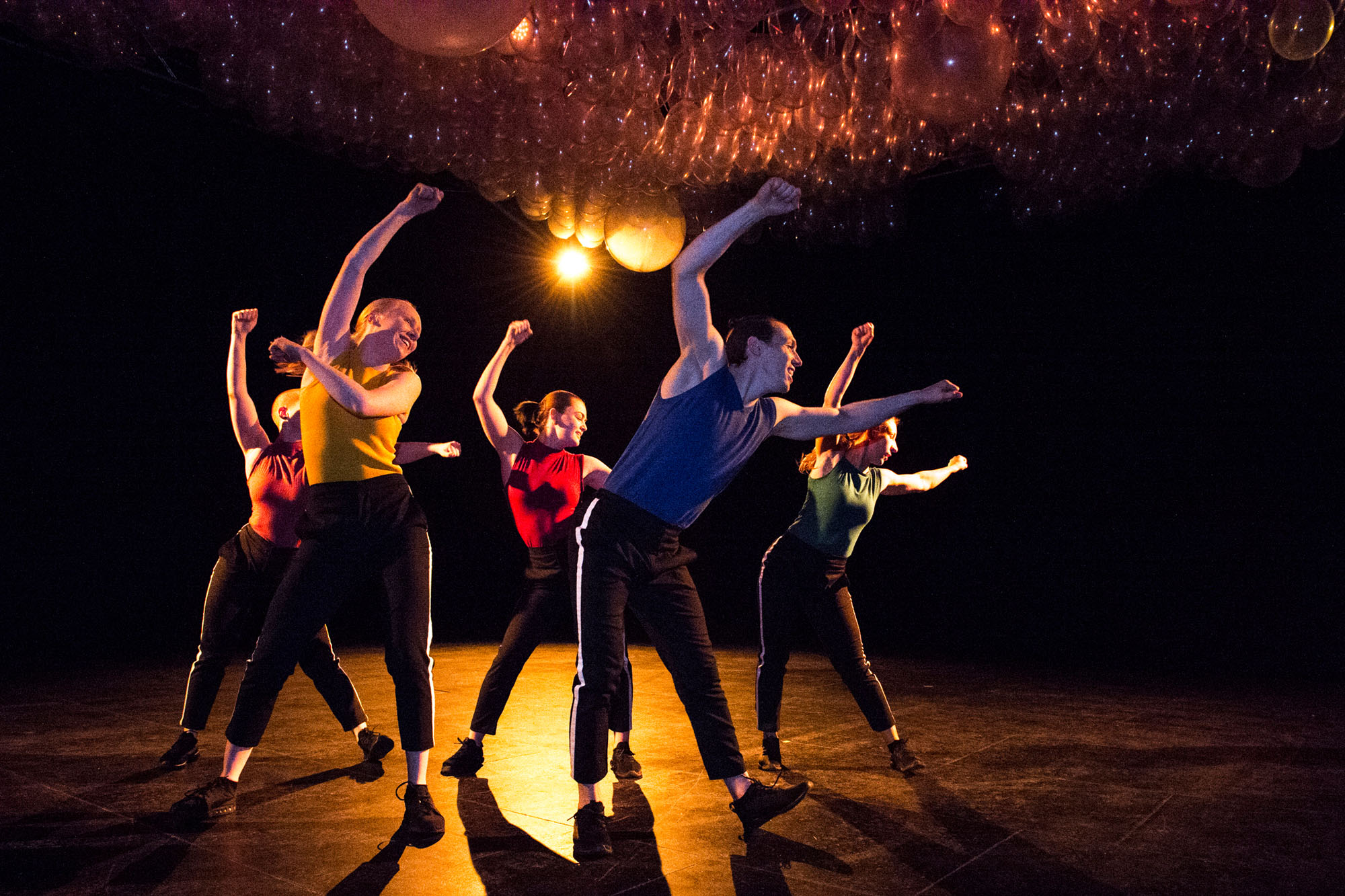 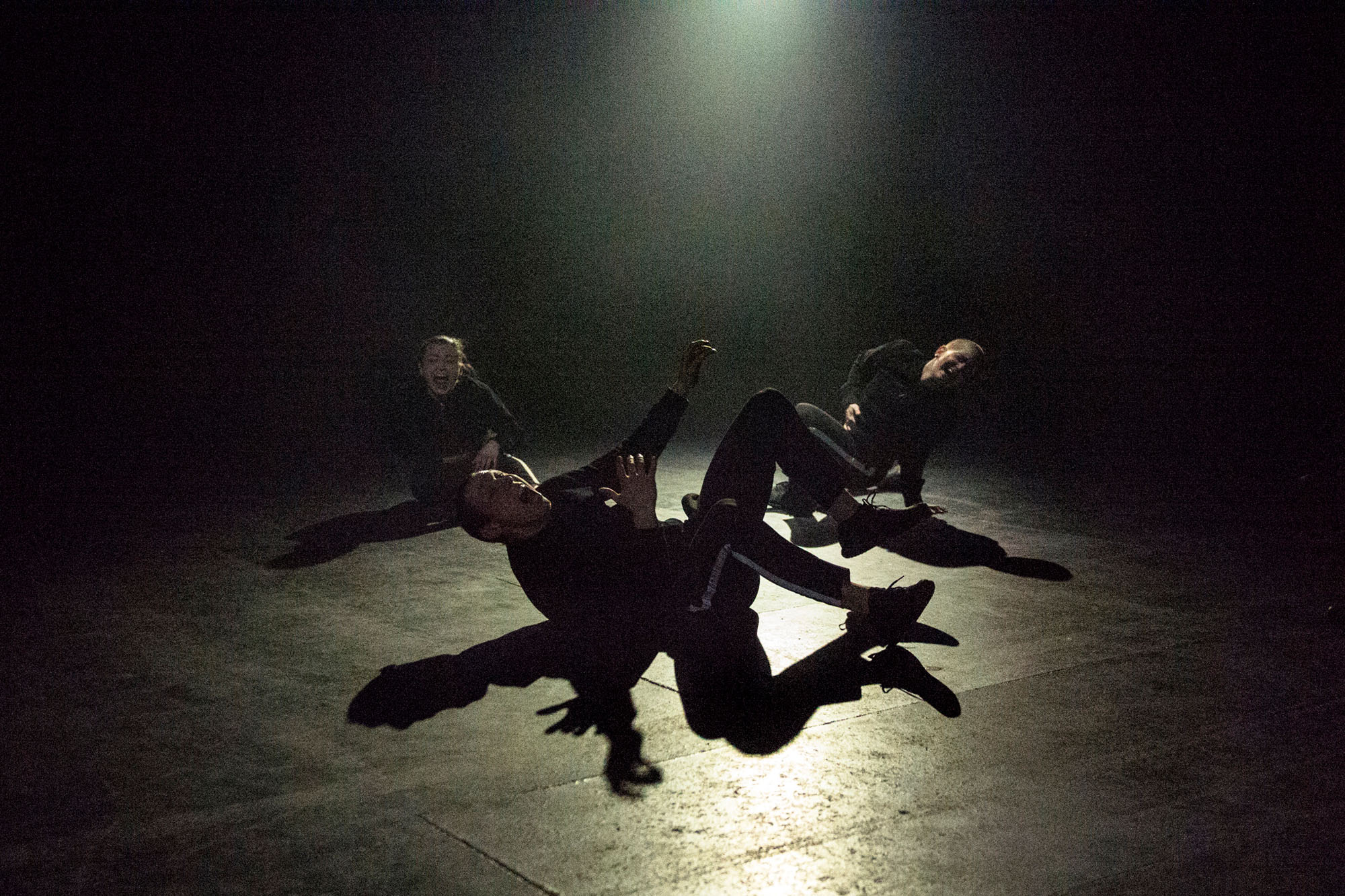 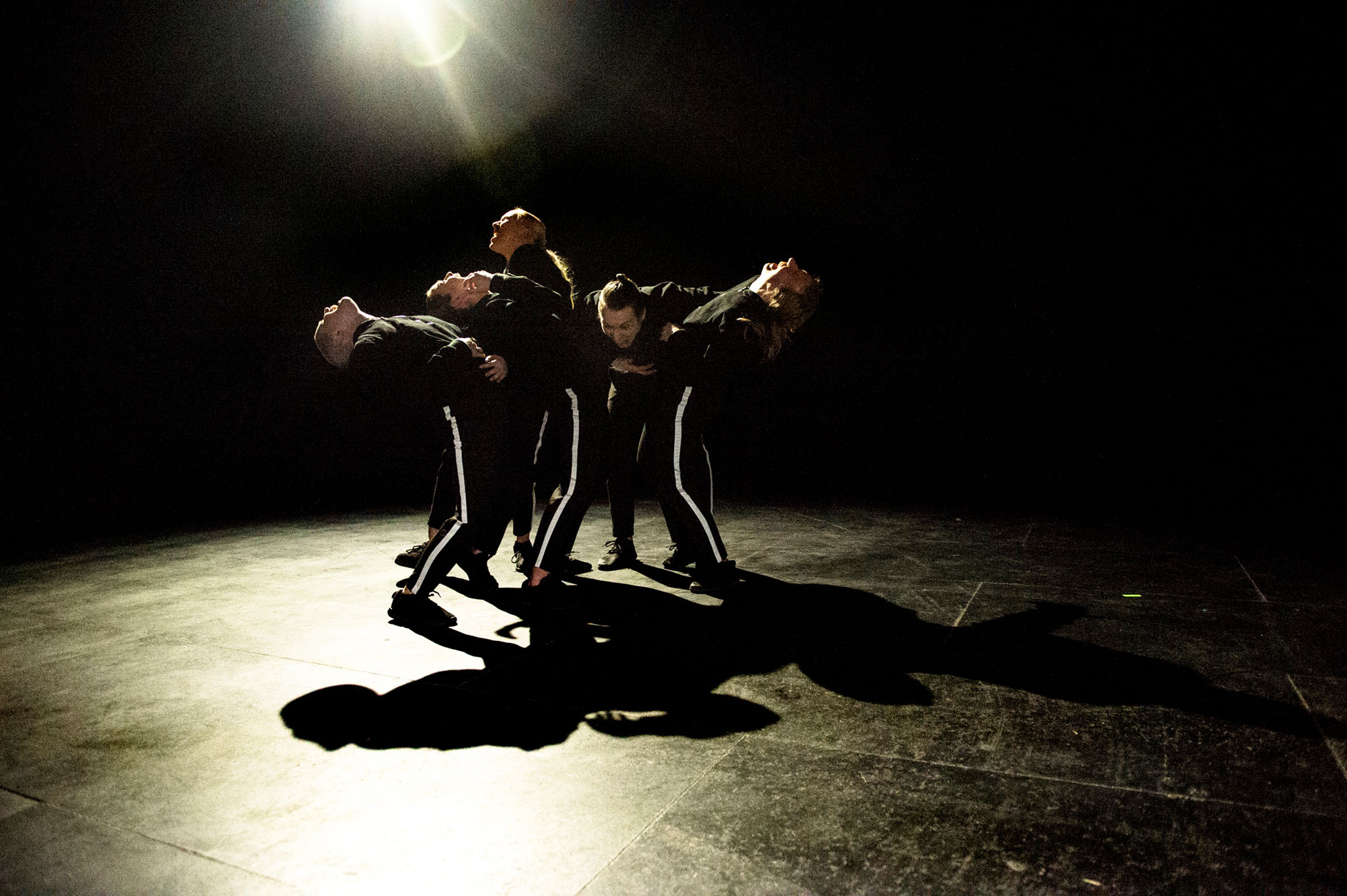 How do we form our impression of something? What really happens and what is it that we think we know?

Trigger produces fragments of information, in which the visible, as a proof of secure knowledge, has almost completely been removed. Soundscapes, text fragments, danced actions and darkness challenge the viewer’s perception, bring speculation to the fore and pose the question, how do individuals and society behave when one doesn’t know any more what one should believe.

A co-production with the Tafelhalle Nuremberg in Kunstkulturquartier, supported by Tanzzentrale of the Nuremberg Region and M.A.D. Dance Academy Nuremberg; financially supported by the City of  Nuremberg, the Federal Programm „Democratic Life“, the Bavarian Association for Contemporary Dance (BLZT) with funds from the Bavarian Ministery for Science and Culture.